Story of Evil Wiki
Register
Don't have an account?
Sign In
Advertisement
in: Story of Evil, Marlon

"What in the world is evil?"

Handbeat Clocktower, or Sound of the Clocktower's Needle, is a song Akuno-P, released on March 30, 2012. This is the seventh song of the Story of Evil.  It follows Kyle Marlon's story after The Daughter of Evil, Praeludium of Red.

In the center of Castle of Hedgehog, Kyle rushes to the top of a tower called the Heartbeat Clocktower to confront Prim Marlon. He questions if she actually is a "demon" or the person he calls "mother". As he runs upstairs several thoughts and memories fill his mind, of Ney and the Seven Sins. Yukina Freesis encourages him by saying that the right path still hasn't vanished yet and that the Story of Evil has ended. She says that as long as they keep praying, the endless rain will one day eternally stop. Now Kyle says to himself that he will no longer hesitate, even if it comes to a point where he has to turn his blade to his own mother and his sister, Ney Futapie.

Almost reaching the top of the clocktower, Kyle encounters Ney posessed by the Demon of Gluttony, and is forced to confront her. Ney gains the upper hand and almost kills him, but he is saved by Germaine Avadonia. Kyle says that one day, when he can laugh at his past suffering, he will write the "true story" of what happened. He questions for the last time if the one at the top of the clocktower, now decaying on the chair, was indeed a "demon" or the person who he once called "mother".

With clear references to Heartbeat Clocktower and featuring a similar melody, Handbeat Clocktower can be considered an arrangement of that previous song.

Kyle as seen in Handbeat Clocktower

Allen and Riliane singing the Lu Li La in chorus 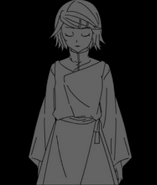 Ney possessed by the Demon of Gluttony

Prim and Ney as they appear in "Handbeat Clocktower"