Michaela, born Michael Arklow, is a forest spirit who dwells in Eldoh's Forest, located in Elphegort. She was infamous for the role she played in Story of Evil.

Michaela was present during the events that unfolded in Moonlit Bear. Using the form of a robin, she witnessed Eve Moonlit commit the sin that begun the story.

In EC 499, she was attacked by a blackbird but was rescued by Clarith. Clarith took Michaela (still in her robin form) to her house where she took care of Michaela until her wings have healed, naming her Grüne and befriending her. Gumillia then arrives in her chipmunk form and Clarith's mother, who apparently knows forest spirits well, let Michaela go. Michaela was baffled by the fact that Clarith was so unhappy with her life. Michaela pitied her loneliness and wanted to be her very first friend. When Elluka Clockworker paid a visit to Eldoh's Forest, Michaela was chosen to help Elluka in finding the "crimes" of the Deadly Sins. When asked what appearance she should have, Michaela thought of Eve Moonlit.

With that, Michaela took her first steps into the human world, but not without having major setbacks with her new body. Clarith happened to find Michaela in the forest when she collapsed due to a fever and brought her to back to her home. When the village mayor threatened to evict Clarith and her mother from their home since they haven't paid their rent, Michaela offered to pay the rent with the money Elluka gave her and asked if she could stay here for a while.

All of the townsfolk adored Michaela due to her wonderful personality and beauty, but she was distraught about how Clarith is discriminated by the rest of the village due to her white hair. When Clarith's mother died, Michaela suggested that she and Clarith leave Yatski Village and told her that she is the nicest person she had ever met. Clarith, with renewed happiness, wholeheartedly agreed.

Michaela and Clarith left Yatski Village to start a new life in Aceid, capital of Elphegort. There, the two of them begun working for Keel Freesis, head of the trading guild. One day, Kyle Marlon paid a visit to the Freesis household and he fell in love with Michaela, giving her a shell pendant to prove his love for her. Michaela took it, believing that it was just a friendly gesture. Kyle did admit his betrothal to Riliane Lucifen d'Autriche and when he asked Michaela about the possibility of "leaving everything behind" and running away with her, Michaela was shocked.

One day, Michaela was in town, singing and there she met Allen Avadonia. Allen too fell in love with her, but Michaela did admit to herself that she couldn't return those feelings. Allen delivered to Michaela a spring onion from Gumillia which is revealed to have the power to communicate to other people, notably Elluka and Gumillia.

News traveled fast about Kyle Marlon's supposed "affair" with Michaela to Riliane, prompting Riliane to spark the invasion of Elphegort known as the "Green Hunting". Elluka and Gumillia attempted to persuade Michaela to leave indefinitely, but Michaela refused to leave her human friends behind and revealed to them that she intends to live as a human permanently. Michaela and Clarith then fled into the forest, pursued by the Lucifenian army. Michaela didn't want to abandon Clarith but she was forced to when she was unwittingly slipped sleeping pills earlier. She was then delivered to a shelter under a well. Allen finds Michaela and promises to help her escape once the coast is clear. Unfortunately, Michaela was stabbed by Ney Phutapie, who was disguised as Allen. In her last moments, she wished for Clarith to be safe. Michaela died, not before seeing Allen one last time.

However, death didn't come by so easily, for Michaela's spirit transformed into a tree sapling and she was recovered by Elluka Clockworker and Gumillia. The two of them revealed Michaela's identity to Clarith and asked her to take care of Michaela until she matures, for she has been chosen to be Eldoh's successor. Michaela then appears in her spirit form and says her final goodbyes to Clarith, not before saying, "I love you". Michaela was finally planted in Eldoh's Forest by Clarith and Riliane.

When Kyle attacked Yukina Freezis, Gumillia, and Germaine, Eldoh persuades Michaela to help. Michaela feels doubtful, since she has lost her human body. However, Eldoh tells Michaela that she doesn't need a body or a voice; what matters is her heart. Determined to save everyone, Michaela sung a song that helped to incapacitate Kyle and return him to normal. Kyle's shell pendant, which is identical to the one that Michaela used to wear, had shone brightly that night.

From the ashes of old, Michaela quickly grew up into the new millenary tree, succeeding Eldoh as the guardian of the forest and forever loved by the inhabitants of Elphegort. Michaela's life afterwards is unclear until the last years of Evillious. Gallerian's Theater did not go unnoticed by Michaela due to it's corrupting influence on the forest. The theater inhabitants have taken precaution that Michaela may intervene since she can directly influence the theater.

Michaela is loving, caring, gentle, and friendly to everyone around her, making her the ideal girl to marry. However, she does not have an interest in romantic relationships, regarding Kyle Marlon and Allen Avadonia to be just acquaintances. In truth, Michaela is initially clueless about love. After asking Kyle about it, Michaela felt that love means to be there for the one she cares most, to protect that person. Michaela then realizes that she loves Clarith. Also, Michaela did feel lonely and a little jealous at Yukina's relationship with Clarith.

Michaela's curiosity towards humans has gotten her into all sorts of trouble, risking her life on multiple occasions. However, her newfound knowledge of humans led her to be Eldoh's successor.

Being a forest spirit, Michaela is immortal. She has the ability to transform into any animal she wants, her favorite being a robin. However, her immortality is lost whenever she is in a physical form, leaving her vulnerable to death. When Michaela had gotten her human body, the ability seems to be nullified until her three year contract as a human expires.

Michaela is also illiterate, apparently because Elluka had no time to spare teaching her, saying that Michaela can just learn along the way. But since she spent most of her time with farmers, Michaela had no opportunity and already she had trouble trying to read Kyle's signature scribbled on his portrait of Ney.

Michaela has a mesmerizing singing voice that can used to communicate with people at long distances and to track down the Vessels of Sin using the song's echo. With that, Michaela successfully tracks down the Venom Sword, which is kept by Keel Freezis.

Initially, she is often seen as a teal-colored robin and an orange breast, something in which her human form and clothing is based on. Later on, Michaela takes the form of a beautiful young woman, even though her body originally came from the one person who had unleashed a terrible evil upon the world.

Michaela was mentioned in The Daughter of Evil, about how Kyle Marlon had fallen for her rather than Riliane.

In The Servant of Evil, Allen met Michaela during his trip to Aceid and had fallen in love with her as well.

The Daughter of White describes her life as a human through Clarith's eyes before she was found dead by Kyle Marlon and Allen Avadonia.

Michaela's point of view song, Wooden Girl ~Thousand Year Wiegenlied~, happens before Daughter of Evil and reveals to the viewers that she is not a human (in which the previous songs had initially speculated), but a forest spirit who wanted to be Clarith's friend. In the end, she was "killed" by a "golden-haired assassin".

Eve Moonlit: Michaela's human body has a resemblance to hers.

Lich Arklow: Michaela's older brother in the Second Period. The two had a strained relationship, never getting along and even constantly bickering with one another after becoming forest spirits. On at least two occasions, Lich tried to kill Michaela.

Gumillia: A fellow forest spirit from Eldoh's Forest. Gumillia did made a promise to protect Michaela should harm come to her, a promise fated to be broken.

Elluka Clockworker: the "capricious sorceress" who gave Michaela a human body. Michaela helps Elluka in her quest to find the Deadly Sins just by using her voice.

Eldoh: As the forest's protector and deity, Eldoh is responsible of Michaela. Eldoh gave Michaela the task of watching Eve Moonlit after she committed the Original Sin, unintentionally awaking her interest in humans. After her death as a human, Michaela is chosen to be Eldoh's successor.

Clarith: Michaela's best friend. Michaela recognizes her love for Clarith and her feelings were returned, though dieing soon after.

Allen Avadonia: He met Michaela while she was singing in town. Allen loves Michaela, but their relationship did not go further than that.

Kyle Marlon: Michaela met him while he was visiting the Freezis family and he claims to have feelings for her. She never returned those feelings, seeing Kyle as only a friend.

Keel Freezis: A wealthy merchant whom Michaela works for.

Mikina Freezis: The wife of Keel. Mikina wasn't willing to hire Michaela but Clarith convinced her that Michaela is a nice person unlike the other discriminatory green-haired people.

Michaela's profile in Entreacte of Evil, The Daughter of Evil Worldguide

(from left to right) Kyle, Michaela, Riliane, Allen and Germaine in "The Daughter of Evil"

Michaela and Allen as they appear in The Servant of Evil

Michaela with other cast members from "The Daughter of Evil, Wiegenlied of Green"

Michaela singing in the outskirts of Yatski Village

Elluka teaching her pupils, Michaela and Gumillia as seen in Epic of Evil fanbook

Michaela and Clarith as seen in the The Daughter of Evil, Praefatio of Blue illustrator gallery 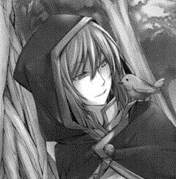