"Heheh, I'm just kidding, Chartette. I don't think you killed her. For the one who killed my mother was me."

Ney Phutapie, real name Ney Marlon, is the thirteenth daughter of the Marlon Royal Family who infiltrates the Kingdom of Lucifenia for her birth mother, Prim Marlon. She is one of Gretel's reincarnations.

Ney was born in Kingdom of Marlon in EC 482 as the illegitimate daughter of Prim Marlon and King Arth. She was given to Abyss I.R. to be experimented on. When she was eight, her brother Kyle painted a portrait of her.[1] In EC 491, after reporting her Uncle Presi's failed attempt to possess the six-year old Riliane Lucifen d'Autriche to the sorceress, Abyss I.R. sent the child back to infiltrate the Lucifenian palace.[2]

Ney was found unconscious by Mariam Phutapie and subsequently adopted by her. She became one of princess Riliane's most trusted maids after the 14 year-old assumed the throne.[3]

In EC 499, Ney swapped places with Allen Avadonia for taking care of Riliane for the day. Around three o'clock, Ney entered Riliane's room to present the princess with her snack but found it empty. She thought she had gone by the mirrors but then noticed the hidden passage dug inside the fireplace and realized she escaped.

Shouting for Riliane and on the verge of tears, Ney was found by Leonhart Avadonia, Allen, and Chartette as she passed between some mirrors. She told Allen that Riliane was missing and joined the search for her in the Forest of Bewilderment.

That night, during the ball held for Riliane's fourteenth birthday, Ney and the other servants were working to make up for lost time due to the search for the spoiled princess. Ney called out to Allen and reminded him that they still had one more task to do; she, Allen, and the other servants brought in the huge birthday cake for her highness.[4]

While Ney and Allen were busy preparing dinner in the kitchen, Riliane stormed inside demanding to know who was stealing food from the palace. Ney looked at a nearby chef as she explained she heard a rumor from the chefs about the incident, and justified that none of the servants were stealing the food. Eventually, Ney admitted that Leonhart was the culprit out of fear of Riliane's wrath.

At some point, Ney had told Riliane that she heard rumors about Leonhart being in multiple love affairs, killed many compatriots, kidnapped a baby from their warring countries, and attempted to overthrow Lucifenia. The day following her confession, she entered the Servant Room and told Allen she heard Leonhart and her mother, Mariam, conversing and that Leonhart was using Allen to kill Riliane. Allen left before Ney could finish speaking on the rumor.

Shortly before Allen and Riliane had enacted their scheme to assassinate Leonhart, Ney had told Allen about his mother's crushes.[5] She was bedridden due to the flu around the time Allen was sent to visit Keel Freesis at his mansion.[6] During The Green Hunting, Ney spied on Allen as he visited Keel in prison and overheard their conversation about Michaela and her location in Eldoh's Forest in Elphegort. She would later tell Riliane about this in the Servant Room when Allen arrived. Appearing nervous, she left and waited outside the doorway and apologized to Allen after hearing Riliane give Allen the order to kill the green-haired girl.

Allen forgave her and Ney asked if he was actually going to kill her. When Allen responded that he wasn't sure,[7] Ney disguised herself as Allen and approached Michaela's hiding spot the next night. Telling her the princess knew of her location and she needed to be moved, Michaela returned to prepare her luggage when Ney charged at her and knocked down to the bottom of the well. Laughing, she descended the ladder and removed her disguise, stabbing Michaela in the chest before leaving while laughing maniacally.[8]

Sometime later, Ney, Chartette, and Riliane talked together in the Heavenly Yard. Chartette, justifying her leaving the palace to buy books, said that Ney also left the palace often. Ney timidly responded she did so to "meet with my friends" and Riliane asked if her friends were men, which Ney said wasn't the case at all. Ney joined Chartette and Allen as they overheard the meeting following Prime Minister Minis's attempted assassination. She argued with the fellow maid after accidentally touching her breast.[9]

Ney fled along with Chartette and the other servants during the invasion of the palace. She returned to find her foster mother, and told her she was looking for her. After Mariam told her to flee, she stabbed her in the back and left her to die.[10] After the revolution was over and her brother occupied the Kingdom of Lucifenia, Ney reported that Germaine Avadonia, Elluka Clockworker, and Gumillia were involved in Michaela's murder.

She returned to Marlon and saw her mother, Prim, again for the first time in nine years, reporting that with the princess' execution, the Three Heroes cease to exist. Prim was concerned that Elluka Clockworker was still alive but Ney assured her she wouldn't interfere  Congratulating her daughter, Prim told her to rest and leave the rest to her.[11]

Five years later, Ney became a commander of Marlon's engineering battalion and is given the Glass of Conchita by the mage Abyss I.R.. In Beelzenia, Chartette and Yukina Freesis found Ney at a cemetery. Ney announces that Marlon has declared war on Beelzenia and uses the Glass of Conchita to raise the dead, forcing Yukina and Chartette to flee and causing havoc on the Imperial City. Ney then becomes the commander of Retasan Fortress, prompting Liliane Mouchet to resign. In retaliation, Beelzenia launches a counterattack on Retasan Fortress and ultimately captures it.

Ney returns to Lucifenia and tells Kyle Marlon that Germaine Avadonia and Gumillia, two of the people that Kyle has been hunting down, are in Beelzenia. She then leaves for Marlon.[12]

Kyle found Ney and Prim at the Castle of Hedgehog and sent two of his soldiers after Ney. Ney escaped through the back door and easily killed the soldiers chasing her. Ney returns to Prim, expecting appraisal for her actions but seeing that Prim is merely neglecting her, Ney becomes insane and stabs Prim, killing her. Having succumbed completely to the Glass of Conchita, Ney attacks Kyle with unwavering ferocity and stabs Kyle in the chest. Just as Ney is about to make the finishing blow, Germaine intervines. Taking advantage of the distraction, Kyle fires Chartette's Rocket Glove, sending Ney flying into the ceiling and crashing down on the floor. Left in a coma, Ney is captured and tied up.

Later that night, Ney appears to Kyle in a dream, with a six year old image; Ney apologises for doing bad things to everyone she had hurt. Ney hopes that:

"If we could be reborn, some other time... Brother, Riliane, and Allen. We can play together, and be friends."

However, the Demon of Gluttony laughed at Ney, saying that she can never hope to be reborn and that Ney will be instrumental in bringing forth the Master of the Graveyard. Ney, completely unaware of what has been said, bids Kyle goodbye and walks into the sea. Kyle woke up and rushed over to where Ney was restrained and finds her dead.

After her death, Ney would be later buried in a cemetery next to her mother, Prim. When Abyss I.R. attempted to use the Glass of Conchita against Riliane, Ney hindered the glass' ability, stalling Abyss I.R. until Germaine finally stabbed her cat familiar, driving the sorceress' spirit out of her vessel, Mikina Freesis, and subduing her for a time. Her soul, now merged with the Glass, would later awaken as the female servant in Gallerian's Theater.

While undercover, Ney appeared to be kind and timid at times. She would often stutter and hesitate when nervous and would consider her words carefully out of an apparent fear of Riliane's anger, which she was careful never to provoke. She was considered honest, but gossiped a lot about rumors and hearsay circulating within the palace.

In truth, she is ruthless and cunning. Her gossip was carefully seeded lies used to manipulate Allen and Riliane to undermine the princess' rule, and her timid personality was a guise to hide her carefully selected words. Ney was needy for affection from her birth mother, Prim Marlon, and appeased her mother's wishes so she could receive her affection. Her psyche was affected by Abyss I.R.'s experiments and, after wielding the Glass of Conchita, took a turn for the worse and developed psychopathic characteristics.

Eventually, the vessel of sin made her act and think like its original owner, Banica Conchita and the lack of affection from her mother drove her insane. Like her half-sister Riliane, Ney realized her sins once it is too late and became consumed with grief before merging with the Glass of Conchita.

During her stay in Lucifenia as a maid, Ney was skilled at doing chores. Allen states that she was better at her work than both himself and Chartette. She is also very skilled in cloak-and-dagger activity, having learned the art of assassination from her foster mother, Mariam.

Ney is also skilled in deception, maintaining her cover as a Marlon spy while feeding false information to both Riliane and Allen, which ultimately leads to the Lucifenian Revolution and the overthrow of "The Daughter of Evil". Similarly, she is able to disguise herself as her half-brother Allen and impersonate him well enough to fool Michaela.

As a reincarnation of Gretel, Ney is able to wield the powers of the Glass of Conchita. After obtaining it, she utilizes its powers over death easily, reviving an entire graveyard and transforming it into her undead army and command it with the strategic expertise of Banica Conchita.

Ney is pale with golden eyes and yellow hair. As Riliane's servant, she wore a standard black and white maid outfit when working in the palace. When Ney disguises herself as Allen, she wears grey attire with a large collar and a pair of brown boots and a brown belt for her knife. She dons a coat similar to his, tying her hair back so that her ponytail is hidden from view, and puts the hood up to complete her costume.

By EC 505, Ney's attire changes to a blue coat with black lining and steel-grey cuffs and has several brown belts worn over it. She wears a steel-grey cape over her new outfit with a single silver pauldron on her right shoulder. When she is fully possessed by the Demon of Gluttony, she dresses in the attire of Banica Conchita.

Ney makes her debut appearance in Handbeat Clocktower. She is shown to be possessed by the Glass of Conchita and was about to kill Kyle until she is stopped by Germaine Avadonia.

Prim Marlon: Ney's birth mother and the queen dowager whom she obeys without question.

Abyss I.R.: The mage who experimented on Ney.

Gretel: Ney is one of Gretel's reincarnation.

Ney Futapie's profile in Entr'acte of Evil: The Daughter of Evil Worldguide

Ney's profile in The Daughter of Evil, Praefatio of Blue

Ney's profile from The Daughter of Evil Schedule Book 2013.png 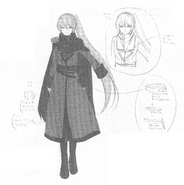 Ney along with Prim in "Handbeat Clocktower" 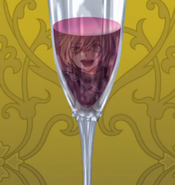 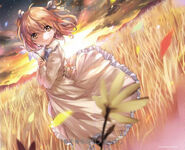 A young Ney as portrayed in "The Daughter of Evil, Praefatio of Blue"
Fanbook3.jpg
Ney wielding Glass of Conchita to reanimated her graveyard army
Tumblr m5ay11SVt11r8vky4o1 500.jpg
Ney laughing as she murders her mother
DoE manga Ney.png
Ney as she appears on the Sultry Evil cover
SultryEvil Ney.png
Ney in the yonkoma
Ney pm.jpg
Ney as seen in the game Project Mirai