Edit
watch 01:36
We're Getting Mutants in the MCU - The Loop
Do you like this video?
Play Sound

Held is one of the gods of the Levin religion incarnated as the ancient Millennium Tree. He is the guardian of the main forest of Elphegort, and is an old friend of Elluka Clockworker.

Around 528 years before the EC calendar was established, Eldoh incarnated himself as a mortal in the world, using a tree as his host. After ingraining himself in the mortal realm, he created the forest around him and all the flora and fauna present in it. Desiring to not directly involve himself with human affairs, he ordered his spirits never to leave the forest or come near humans.[1] At some time afterward the Tree of Eldoh became known to the people in the nearby country of Eldohgort and was worshipped as part of a cult sect in the Levin religion.

After Eve Moonlit committed the Original Sin in EC 001, Eldoh ignored the act, believing he should not interfere with the mortal world. In EC 002, Held secretly met and became close with the sorceress, Elluka Clockworker. Once Hansel and Gretel murdered Eve and split the Original Sin into the Seven Deadly Sins, Eldoh realized the danger they posed. Having no direct connection to the Sins, Eldoh summoned Elluka in EC 015 and tasked her with collecting them in his place. Expecting Elluka to complete her mission in about a hundred years, the earth deity placed the responsibility upon her and awaited her mission’s completion.[2]

In early EC 499, Elluka returned to Eldoh, warning him that she predicted Lucifenia's destruction, asking him if it was possible to reincarnate spirits as humans. Sighing, Eldoh noted how few pilgrims arrived anymore before returning to the topic, agreeing that it was possible, but that he doubted such a large country could be destroyed. Elluka responded it was connected to the Demons of Sin, to which he noted that Princess Riliane, like Banica and Venomania, would cause a catastrophe, asking if they could exorcise the demon instead. Elluka explained she had but the demon appeared to possess her a second time, rooting itself so that it could not be easily removed.

Held, realizing Elluka’s intent, said that she wanted to use Clockworker magic, warning her that if she failed, she would destroy the country like she had done to her own. Elluka brushed it aside, questioning why Riliane was still under demonic possession, to which the god speculated that the mirror Elluka exorcised and sealed was only a piece, with the rest of the vessel living somewhere else. Eldoh then asked the specifics of Elluka’s premonition, asking which of the four images was purple.

Learning it was the invasion of Elphegort that was inevitable, the earth deity asked Elluka what she would do if she failed. When Elluka declared she would simply leave and avoid the mess, Eldoh mused she was that kind of person, but noted how it was different than before. After a brief silence, Elluka asked Eldoh to clarify, and he elaborated that she was afraid to lose the people she cared for and would rather run away than repeat the Great Levianta Fire Disaster. Enraged, Elluka punched Eldoh’s “face”, albeit unaffecting his composure.

Lecturing her, Held told the sorceress it wasn’t her place to serve “justice", describing that Lucifenia’s existence may or may not be better for the world. Hearing Elluka’s excuse that it was her duty to suppress the vessels of sin before the calamity, Held returned to the topic of needing an “apprentice” but became tired, yawning. Despite Elluka’s violent attempts to stop him, the deity slipped into a slumber, resting for some time.[3] He later awoke, learning that Michaela, one of his forest spirits, had fled the safety of the forest and was missing.

Eldoh roared upon Michaela’s return, reproaching her the entire night for breaking his regulations and being caught by humans. The next day, Eldoh heard Michaela’s apology, calmly explaining that he just wanted her to learn from her mistakes, describing how important she was to him and how worried he had been. After Michaela apologized again, Eldoh forgave her then slipped into another slumber. Days later, Eldoh awoke and was immediately approached by Michaela, who explained that Clarith prayed to him while he slept.

Eldoh explained the discrimination facing the Netsuma tribe, noting that, with her mother sick, Clarith would be unable to flee. As Michaela pressed the tree deity for a solution, he reiterated that the spirit should not interact with humans, as not even god should interact with the human world. With a timely arrival, Elluka retorted that she never expected Eldoh to say that, asking then why she was given her mission. Eldoh explained his reasoning and Elluka asked if he made his decision. Having forgotten their conversation from weeks before, Elluka angrily chastised the tree god and described that she believed he was right.

Meditating on this, Eldoh looked upon everyone for a long while before finally answering the sorceress, permitting her to take two of his forest spirits for reincarnation, one as her apprentice and the other as a detector of the sin. Met with Elluka’s surprise, the god expressed his guilt over not taking responsibility over the Sins born in his forest and that he now could not leave the forest and so was willing to help her.

When asked who would be appropriate, Eldoh responded that Gumillia would be an excellent disciple. Secretly deciding to have Michaela succeed him as the Millennium Tree, Eldoh used the opportunity to prepare Michaela, asking her if she would like to be the locator. Met with confusion, the god clarified that, due to her fascination with humans, he offered her a rare chance to learn about them, giving them three years to complete the task. After the sorceress accepted Eldoh’s plan, the two discussed different topics before she departed with the two spirits.[4]

When the Millennium Tree Forest was burned in EC 500, Eldoh was worried for all the life in the forest; due to Elluka’s intervention, a rainstorm doused the flames, saving Eldoh and much of the forest from destruction.[5] At the conclusion of The Green Hunting, Eldoh was approached by Elluka and Gumillia, curious as to why Michaela’s body became tree saplings. Eldoh revealed to them that his mortal form depended upon the life of the Millennium Tree and that it was soon his time to depart from the mortal plane.[6] Explaining his plan for Michaela and his reasons for sending her with the sorceress, Elluka intensely argued with him before finally accepting it. Afterwards, Gumillia told the earth god that she chose to remain human and help Elluka; saddened, he accepted her decision and then fell back into another deep slumber.

In early EC 501, he contemplated his fate, entrusting the resolution of “Sin” to humanity and his successor. He watched as two visitors, Clarith and a blond-haired girl, came to him, praying before planting Michaela’s sapling in the ground. Seeing his child return to him, he decided to impart all his knowledge to her, finding it to be his atonement for his past mistakes. Witnessing their interchange before returning to prayer, the god wondered who Rin was apologizing to and why she was crying. Shortly afterward, Clarith joined her in asking for forgiveness and the god watched as they cried like that until nightfall.[7]

After Kyle Marlon was possessed and transformed by the Demon of Vanity, Gumillia, Yukina Freesis, and Germaine Avadonia fled into Eldoh's Forest. Gumillia consulted with Eldoh on how to defeat Kyle. Eldoh answered that the only way to defeat Kyle was to strike when the full moon appeared, in which Gumillia's magic would be at its peak strength. However, Kyle would be at his full potential at that time as well. During the fight, Eldoh convinced Michaela to sing so that Kyle could be subdued. Michaela did so, ending Kyle's rampage once and for all.[8]

After Eldoh's earthly demise and departure from the mortal plane, Michaela succeeded him as the Millennium Tree, acting as the guardian of Millennium Tree Forest and mankind.[9] Centuries are his "death", his involvement with Michaela and Elluka would be "reviewed" by the Master of the Court. While organizing the "court cases", Gammon Octo noted Eldoh's connection between the two, citing Eldoh as "confusing" along with the other characters involved.[10]

Eldoh often remains outwardly calm, meditative, and serious, carefully considering a situation and it's reprecussions before making a decision or taking action. Due to this, he believes it is not the place of the gods or spirits to interfere with humanity, leaving them to their own devices and sending Elluka, a human, to collect the vessels of sin in his place. Despite this, Eldoh does not find himself infallible, openly admitting his mistake when handlng the birth of "Sin" into the world as well as not acting before it was spread outside the forest and therefore beyond his control. Much to Elluka's ire, Eldoh acts like an old man, randomly falling asleep for months at a time without finishing a discussion and sometimes even forgetting that the discussion even took place. Similarly, he acts sagacious, supplying prudent advice or insight regarding affairs.

As the guardian of his forest, he cares deeply for the life residing in it, considering all the spirits he created to be his precious children. As a result, he acts protective of the forest and regulates his spirits to remain within the forest where they are safe from being captured or killed. Despite this, he is not above anger, as he irately reprimands Michaela for disobeying him. Observant, Eldoh recognizes the strenghts and flaws of those around him, seeing Michaela's human fascination with potential and noting Elluka's tendency to run away when emotionally involved in a matter.

Being one of the three dragon gods, Eldoh wields divine power over life and the earth. Incarnating himself as a tree, the deity spontaneously generated the forest around him and all the life in it, including the spirits with their great magical power. Similarly, he has the capability to manipulate life, providing the means for the forest spirits to transform into physical animals while in his forest, allowing them to interact with the world. Worshipped as part of the Levin religion, Eldoh implicates he was responsible for providing bountiful harvests to humans before they began mastering the land themselves.

In spite of this, his powers after incarnating are limited, stretching only as far as the forest. Likewise, his earthly form is unable to move, being rooted in the ground, and therefore must assign others tasks that he cannot complete. A voice of reason, Eldoh aptly helps those seeking his guidance as best he can and remains objective in his observations or deductions. Oddly, he is an impressive heavy sleeper, slipping into a comatose easily without waking regardless of the source, even Elluka's constant violence upon him.

Before entering the human world, Eldoh took the form of a dragon. After incarnating himself as a tree, he grew into a twisted bundle of trunks, becoming the first and largest tree in his forest. Although a tree, his body had a "face" which resembled an old man's visage with a long, crooked nose and hollow eyes.

The Daughter of White

Elluka Clockworker: An old friend of Eldoh. Although they are friends, they do get into pointless arguments. Elluka does refer to Eldoh as a "smelly old man", as well as an "old goat".

Michaela: A spirit of Eldoh's Forest. Eldoh deeply cares about her and constantly worries about her growing interest in humans.

The Tree of Eldoh as seen in The Daughter of White 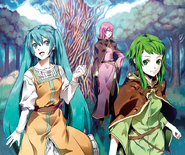